This is my third and last post about Salt Lake City, which I visited for the garden communicators annual conference in September.

I live in a town that’s famous in planning circles – the “garden city” of Greenbelt, Maryland. It was a New Deal-era Utopian experiment, with the involvement of both Franklin and Eleanor Roosevelt. We’re proud of that, though not all its features work well. So in search of solutions, I sometimes visit other planned towns.

Which is exactly what Salt Lake City is – a planned community of small farms, originally. I’d seen it listed as one of the “10 Towns that Changed America,” along with Greenbelt. But on my visit I realized that the small farms had turned into regular city blocks, at least on the ground. (Views from the air might still reveal its original lay-out.)

Happily I learned that a new planned community was on the conference agenda as an option to visit, which I did. It’s the town of Daybreak, 23 miles southwest of SLC.

According to the Daybreak story, construction began in 2004 on the site of the former Kennecott Copper Mine. When completed, it could contain more than 20,000 residential units, and 25% of the land will be preserved as open space. The commercial buildings are all LEED-certified and the homes are all Energy Star-certified. All good.

Though the population of Daybreak isn’t diverse, its home styles are – in price, density and style – with condos and townhouses selling for about $250K and single family homes in the $580K to $1 million range. (See the Daybreak homes for sale.)

So unlike the dull uniformity of homes in my town (including the one I live in), “Architectural variety is the cornerstone of Daybreak’s design philosophy. It makes the simple act of walking down the street a joy. And it lets each home fulfill its most important role: to reflect the personality of the family who lives there.

“Exterior styles include Colonial Revival, Craftsman and Victorian. The homes along each street also have brighter colors than are found in most suburban neighborhoods. Recently, homes with a more modern style have been added.”

Hear, hear! Overplanning and conformity make my neighborhood a lot less interesting to walk around, especially compared to the famously colorful housing in my former town. 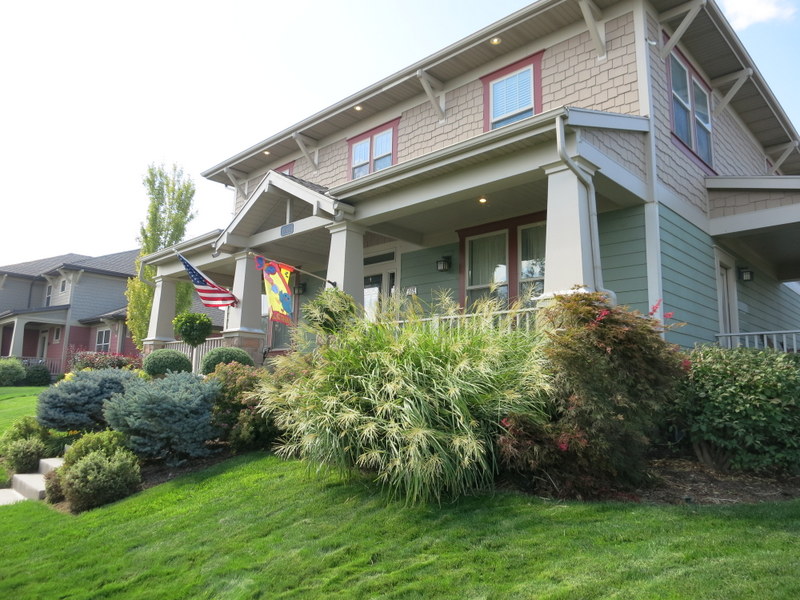 Almost every Daybreak home has “a big front porch that stimulates conversation, inspires neighborliness and looks way better than a garage.”

Something else Daybreak does right is funding its events and amenities adequately through a 1 percent surcharge on all home sales. The funds go to Live Daybreak for all sorts of amenities and activities for residents.

So in addition to a community center, with a full gym and exercise area and pools, Daybreak has 22 miles of trails and “over a dozen community parks,” and a man-made lake for non-motorized boating, fishing, and more.

Perhaps the most important feature of the whole plan is Daybreak’s walkability, following the “5-minute rule.”

Studies have shown that most people are willing to leave the car in the garage if the place they want to go to is within a 5-minute walk. We based the plan for Daybreak on this simple rule, placing parks, restaurants, shopping, schools, offices and light rail within easy walking or biking distance from your home. And tying the entire community together with trails, sidewalks and bicycle highways.

So all homes are within a five-minute walk or bike ride of a major amenity such as a park, the lake, or a shopping area, reducing dependence on automobile travel.

Walkability was also the central planning feature for Greenbelt, thankfully. I illustrated its success in a blog post called “Destinations on my 7-Minute Walk.” (Close enough.)

Gardens, and Reactions of Garden Writers 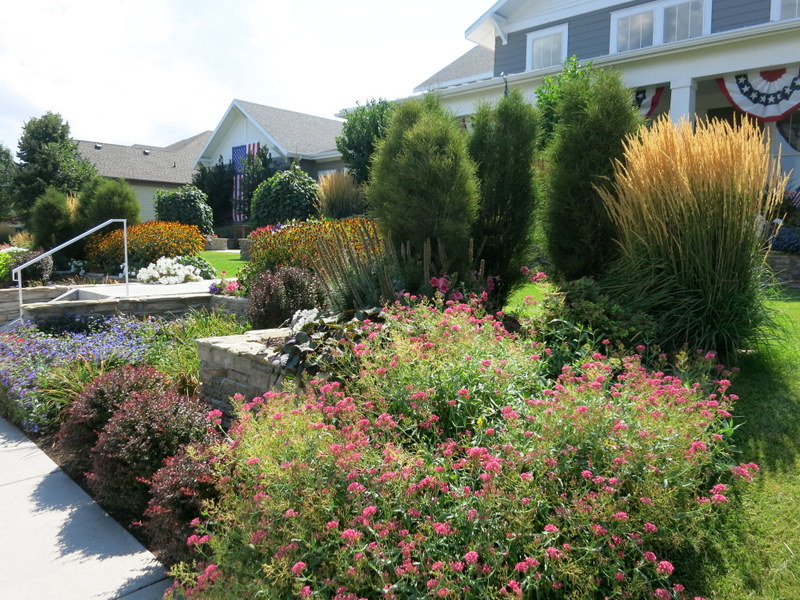 Of course we saw some terrific gardens in Daybreak – ones with lots of outdoor living spaces, where desert-dwelling residents can apparently sit and not be eaten by insects.

But as our bus left Daybreak I asked everyone around me what they thought of it and they all expressed criticism for the restrictions imposed on residents. Welcome to my world! Planned communities and homeowner association rules aren’t for everyone.

I found the restrictions listed on the Daybreak Community Association website and yeah, they’re pretty daunting.

The following shall be prohibited at Daybreak:
(a) Plants, animals, devices or other things of any sort whose activities or existence in any way is noxious, dangerous, unsightly, unpleasant or of a nature as may diminish or destroy the enjoyment of Daybreak;

Pursuit of hobbies or other activities that tend to cause an unclean, unhealthy or untidy condition to exist outside of enclosed structures on the Unit;

So vague! I imagine they could be used to deny almost anything. 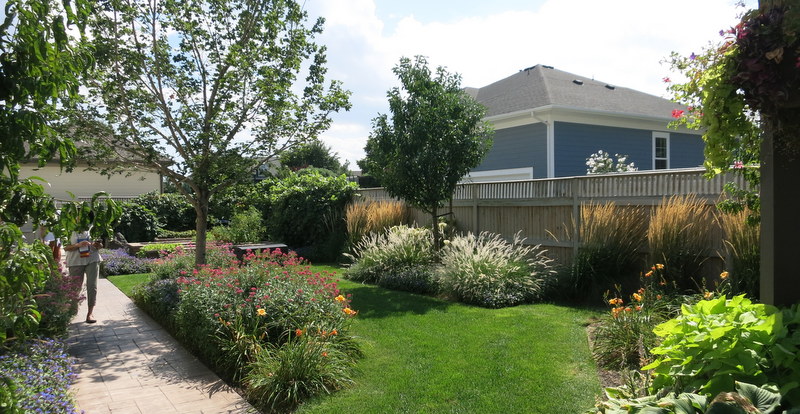 As for gardens, lawns are restricted in size to no more than 50 percent of the yard, which makes sense there in the desert. Required also are 3-5-foot foundation plants, and there must be plants (not lawn) for 2 feet on either side of fences. That’s done nicely in the garden above.

Fencing choices are the most restrictive I’ve ever seen – one style, one material, all stained the same gray color.

Sure enough, the one resident I was able to chat with complained about the mandatory grey, suggesting that a subtle green would be more appropriate around her particular home. I agreed that a choice of a few colors wouldn’t kill them – all very tasteful, of course.

So if I lived there I’d be trying to get the rules fine-turned for the best result possible. But big picture, in so many important ways, I think Daybreak is pretty genius. 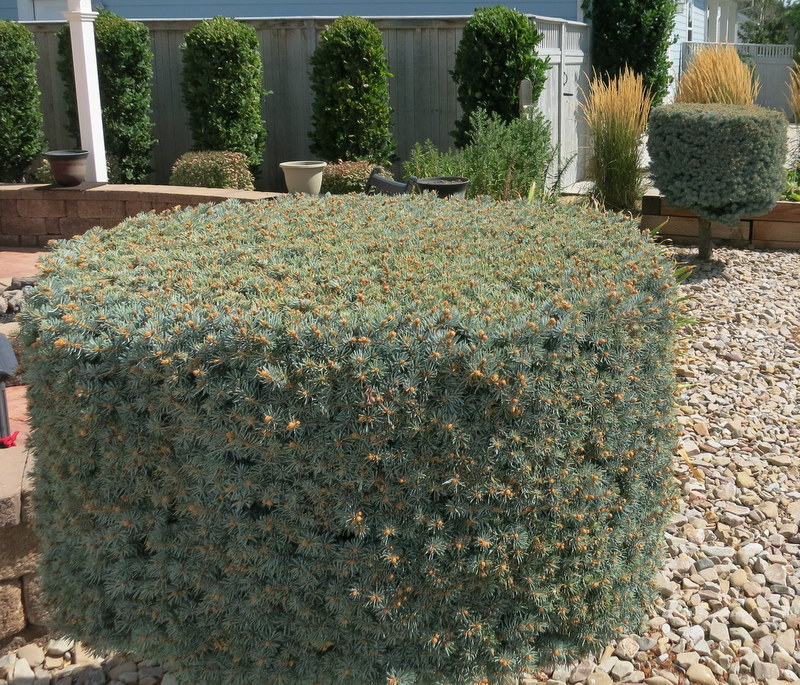 Finally, I think we all noticed these marvels of pruning creativity, which to my eyes demonstrate that some rules – like good pruning practices – are best followed.