I suppose most suburban gardeners have some mammals to deal with in their garden – squirrels, rabbits and deer being the top nuisances in my area, so far. That is, until this fat-and-happy groundhog took up residence under my neighbor’s shed, and we think it has a mate, too. (We’re not sure – they all look the same to us.) 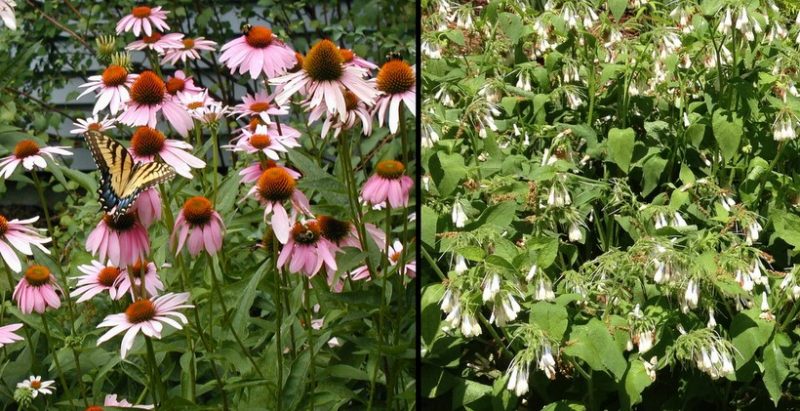 The first plants to fall victim to groundhogs were Echinacea purpurea, which were sheared to the ground (sorry, goldfinches!) and the spent flowers of comfrey – which I don’t miss at all. That’s all so far in my back yard.

My front garden is just starting to show groundhog damage, most obviously the sweet potato vine here in before/after photos taken just a day apart. So fleeting! And I’d taken that “before” photo so I could brag about how great this pairing looks, proclaiming “Look Ma – no Flowers!” or some such. Ha!

Our resident groundhogs have also defoliated several Morning Glory vines I’m training as privacy screening, among several other vines (Crossvine, Sweet Autumn Clematis and Purple Hyacinth Vine) but Morning Glory is the most vigorous of them all. Or was until the ‘hogs got ’em (a fitting nickname, given their appetite).

These select few plants (thankfully) among the many I have on offer for resident mammals are right in line with what my research reveals about their preferred diet. For example, I found this list of plants eaten by groundhogs in the Pennsylvania garden of the blogger Cosmos and Cleome.  Echinacea, sweet potato vine and morning glory are all there! The good news is that they’re the only plants on this list that I’m growing this year, so that gave me hope.

Until I did more research and learned that “In the wild, groundhogs can live up to six years with two or three being average.” Probably more like six because we’re short on groundhog predators around here (just the occasional red fox).

Interestingly, “When alarmed, they use a high-pitched whistle to warn the rest of the colony, hence the name ‘whistle-pig’. Groundhogs may squeal when fighting, seriously injured, or caught by a predator. Other sounds groundhogs may make are low barks and a sound produced by grinding their teeth.” Have a listen.

What’s hard to find are research-based lists of what they eat, beyond “primarily wild grasses and other vegetation, including berries and agricultural crops, when available…sheep sorrel, timothy-grass, buttercup, tearthumb, agrimony, red and black raspberries, mulberries, buckwheat, plantain, wild lettuce, all varieties of clover, and alfalfa.” Never heard of some of those! We DO have clover all around us (though not in MY lawn-less garden.)

From another source: “They especially like certain garden crops like carrots, beans and peas. They will even climb trees to eat apples and pears. Groundhogs have been known to decimate an entire garden by taking a single bite out of a dozen different zucchini or peppers. They do the same to pumpkins ruining farmers’ seasonal chance of selling them at Halloween.” Glad I’m not trying to feed any humans from my garden.

On the subject of groundhog damage, it’s disheartening to read that “An adult groundhog will eat more than a pound of vegetation daily. In early June, woodchucks’ metabolism slows, food intake increases, their weight increases by as much as 100% as they produce fat deposits to sustain them during hibernation and late winter.”

But enough reading – time for action! I bought some of this repellent and am spraying the remains of my most vulnerable plants.

And my neighbors and I have decided to pool our resources and hire a wildlife-trapping company to take our ‘hogs away. And not just for the sake of our gardens. We’re learning about possible damage to the homes and sheds they live underneath.

So to our chubby, voracious underground neighbors I say – “Safe travels!”