For whatever they are worth, here are some stray observations that have rattled around in my noggin lately when I’ve had too much time to think.

Let’s start positive! Why not? Here’s something I’ve been loving—the Fashionably Early series of Phlox. They’re some kind of hybrid. I don’t know the parentage. I wish I did, but it’s probably one of those things where one could possibly “know too much.” I’m thinking that if I were to find out, someone would have to kill me. Possibly Hans Hansen, who bred this series, but maybe not. I would think it’s way more important for Walter’s to keep him in the field and away from the rough stuff, so it makes more sense that there would be another among them who makes the call to the “guy who knows guys” that would set my offing in motion. 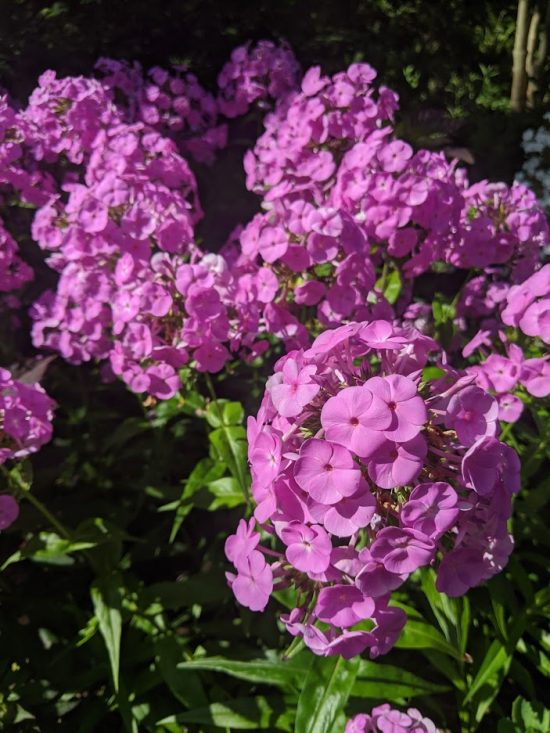 I actually met Hans last year at MANTS Show in Baltimore, and, as my good luck would have it, wound up considerably less than socially distanced from him on the packed train all the way back to the airport. This was way back in January of 2020 when it was still okay for people to be within shouting distance of each other and sometimes even desirable. An avowed opportunist, I, of course, peppered the poor guy with question after question the entire journey. He had absolutely no means of escape, and yet, I must say, he was surprisingly gracious. 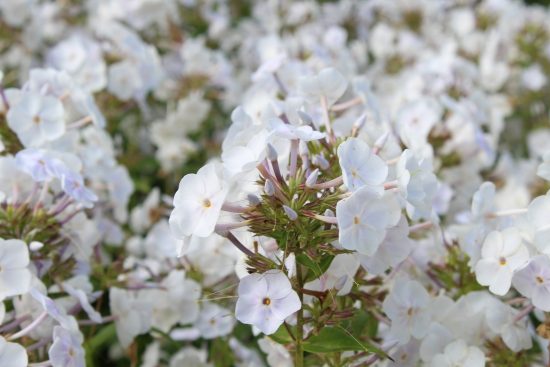 In fact, I feel like we even connected a little, but that doesn’t really matter. What does is this. These are great new Phlox that more or less look and act like Phlox paniculata in the garden, just shorter, earlier blooming, longer blooming, and possibly a little quicker to become wider clumps. No mildew. Four varieties, ‘Crystal’ (white), ‘Flamingo,’ ‘Princess’ (pink), and ‘Lavender.’

And now, finally, to something I’m loathing. I hate weather forecasters who cheerfully crow about our beautiful, sunny, 5-day forecast when we’re on day whatever of a drought. This kind of behavior is truly clueless and insensitive to all gardeners, farmers, and, I don’t know, maybe some other people, and I often hope and pray that harm comes to them. I think you should too.

For something I’m trying to decide on, I’ll mention the new Stihl gasolines for two and four cycle machines that are now available through licensed dealers. Regular gas station gas is problematic for gardeners. As if they’re waiting to see if the good old days of leaded gas will return, small engine manufacturers apparently haven’t really re-engineered for the higher alcohol levels in gas these days. On top of that, gas goes bad surprisingly fast, and, when it does, it gums up small engine carburetors. You can buy additives. You can buy miracle 2-cycle oil. But in the end the hapless, power tool wielding gardener winds up endlessly agonizing over things like whether to burn out all the remaining gas when the work is done, what to do with leftover gas at the end of the season, who to blame when the engine stalls in the middle of a job and won’t restart, and, most of all, who to kill when your mower, blower, and string trimmer are all DOA come Spring.

A carburetor rebuild costs plenty, between $75 to $125, and it’s aggravating to pay it again and again, but worse is the downtime. The repair takes anywhere from three days (when you don’t really need the tool) to at least a hundred weeks (when you urgently do).

So along comes Stihl with fancy new high tech, high octane, two and four cycle gasolines, which, for me at least, has solved all of those above problems. Haven’t had a machine fail to start since I switched to them. (Knocking on wood. Lord, look at me. I’m knocking on wood!) Of course, I’m admittedly stringing long chains of curses together in my head as I’m paying for the stuff. Thirty freakin’ dollars!. For a gallon of (somewhat classical) gas! Welcome to our Mad Max dystopian future of horticultural hordes hording unaffordable gas for string trimmers and chainsaws courtesy of the Andrea Stihl AG & Company of Waiblingen, Germany. But, on the other hand, how much is less stress worth? Is it worth $30 every time you pull the cord during a season? That’s a tough one.

One loathsome side note. Check out the similarity of the cans for 2-cycle and 4-cycle. Years ago, I accidentally used 4-cycle gas in a 2-cycle machine. Only takes about a minute to destroy a $350 tool forever, and the sounds I heard will torment me forever! This winter, I bought the 4-cycle Stihl gas by mistake. Didn’t even know they made two types. I had filled the tank on my (2-cycle) chainsaw with it when I noticed the can had a red cap for some reason and wondered why. Took a closer look. Then I went and got my glasses, came back, and looked again. 4-cycle gas! I avoided calamity by that much!

Thinking I could potentially save woeful future heartache for other old people just a tad less capable than me, I recounted this whole story to the teenager at the checkout counter at the Ace Hardware when I went there to buy another gallon of budget-busting Stihl gas I had saved up for by raiding ash trays of loose change from unlocked cars in the parking lot. I told him that he and all the other clerks should make it a point to confirm with each customer which gas–the 2-cycle or the four–that they are buying. As a courtesy. As a service. Especially to anyone who looks over fifty years old! I told him that this should, in fact, be the Ace Hardware Company’s corporate policy!

Now I have to tell you. If you had asked me to describe myself just before I entered the store that day, I would have told you that I was a reasonably bright, good natured, sometimes humorous, fairly well-adjusted, and surprisingly high functioning alcoholic. But after the look that teenager gave me in there, even though lasted mere seconds, my self-image became something else completely. I was from that moment on a bitter, old codger who watches too much cable news, forgets why he enters a room every single time, rages at strangers about nothing they care about, and who smells like nothing else on the planet. Like there’s not even really anything to compare it to.

Let’s add that kid to the list of things I loathe.

Probably a good time to swing back to a something I love. Callisia rosea ‘Morning Grace,’ (syn. Tradescantia rosea). A certain friend of mine called Irvin Etienne recently expressed on Facebook, unsolicited and unprovoked, that he hates spiderworts. There is nothing sadder than when a previously loved and respected member of the gardening community soils himself like this so publicly. In that one comment, Irvin was cut and pasted from “a thing I love” to “something I’m deciding on.” Just kidding. I love Irvin. Everybody does. But he’s been under a lot of stress lately. Issues with chickens mainly. Like the class act that I am, I am choosing to give him the benefit of the doubt. And I’m going to assume that he had not yet seen ‘Morning Grace’ before he uttered those terrible words. Thus, his ignorance has absolved him, and ‘Morning Grace’ is simply the most beautiful plant ever. It is a lovely, diminutive, demure, elegant, adorable, sweet, little gem of a plant, and also undeniable evidence of God’s radiant love for each and every one of us! At least for each and every one of us who grows it. And it’s easy! Requires no special effort to grow. Irvin really should try it. I’m thinking Irvin needs cards and letters from everyone urging him to rethink his opinion on spiderworts. You can send those to his attention at Newfields, 4000 N. Michigan Road, Indianapolis, IN. Include a one-gallon pot of ‘Morning Grace’ if you can afford it. 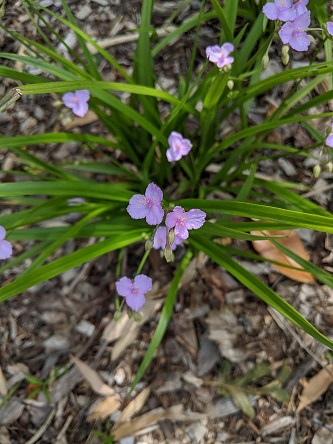 For loathing, again, I submit, my old, 1990s, Sear’s metal garden shed. It was such a nightmare to assemble that I had become a berserk, raging, cussing, wild-eyed, madman by the time it was finished. I remember that distinctly. So does my family. And the neighborhood. And, I’m told, the tale has been passed down now for over 25 years at the Hamilton County Justice Center. A continuous oral history passed from current convicts to every new one.

Fact is, after all that suffering during the assembly process, the damn thing was never any good. The sliding doors stopped sliding almost immediately. I had to duck to get in and out. It was always baking hot and dark and infested with spiders, mice, and wasps, and there was never any good way to organize it. Over the years, it has become a dilapidated, rusty eyesore. Especially for our neighbors, whom after many years we’ve kind of gotten to know and don’t entirely dislike. On our side, it is generally hidden by shrubs, although it has recently developed the bad habit of showing up rather startlingly in the background of way too many otherwise passable garden shots. So it’s been decided that it must go. I know already that this chore will be awful, possibly even worse than assembly ever was! I’m living in dread.

I could go on and on, especially about things I loathe, which indeed does give me special joy. Garden tour garden descriptions and plodding, long-winded garden speaker biographies read by master gardeners are like thorns in my side. Right now annual weeds are an almost daily bane of my existence. Oh, and hoses. I’ll save that one for a special time in the future, but I will say for now that we as a society simply won’t be civilized until someone figures out a way to transport water from spigot to plant without resorting to hoses. 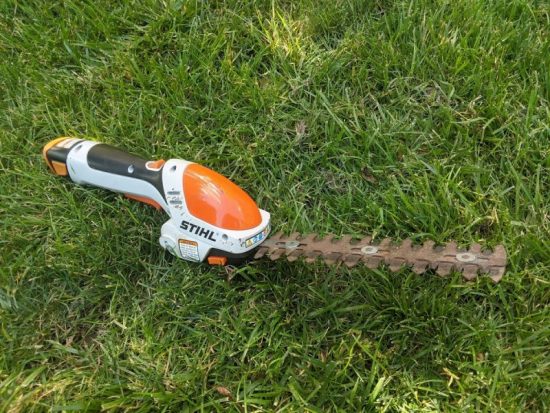 But I’ll finish with one more thing that I like. It’s a battery powered Stihl hedger that I recently bought. As a certified landscaper, arborist, public garden professional, and an award-winning but troubled garden writer, I am sworn to always warn everyone all the time that one should never fall to temptation and shear anything ever. But I can’t. Because I do. (Lord, the truth can be liberating!) Fact is, that more than being all those things, I’m also a weak and stressed out dude who never has enough time. So I shear. A lot. And this thing makes it easy. It’s light, the battery lasts forever, and I regularly turn it loose on our boxwoods and Kerria, and I do so, these days, with absolutely no sense of guilt. My plants. Free country. Sometimes I also deadhead with it, shave off occasional weeds, and, once, even tried trimming my toenails. Not suggested.

Should mention here that despite two mentions of Stihl products in this blog that I am not a paid celebrity spokesperson for the Andreas AG Stihl KG company of Waiblingen, Germany, and I’ll prove it by inserting here a mean-spirited and entirely unnecessary bit of snark. As a battery powered machine, this bypasses an engineering accomplishment that has eluded Stihl for decades of fewer but very efficient German work weeks—designing a gas cap that works. Can’t begin to tell you how many tanks of that expensive Stihl gas their worthless caps have allowed to spill to the ground, and, man, it felt good to get that out. So there. Boom. Achtung, baby! You couldn’t see it, but I just dropped the mic.